There is widespread historic and continued rapid land loss
within the project site and surrounding areas resulting from
subsidence, wind erosion, storms, and altered hydrology.
The wetland loss rate for is -1.53%/year based on USGS data
from 1984 to 2015. Furthermore, the limits of Southwestern
Louisiana Canal are difficult to determine in some areas
because land loss is causing the coalescence of the canal
with adjacent water bodies. Natural tidal flow and drainage
patterns which once existed are currently circumvented by
the increasing area of open water. Data suggests that from
1932 to 1990, the basin lost over 245,000 acres of marsh, and
from 1978 to 1990, Barataria Basin experienced the highest
rate of wetland loss along the entire coast.

The project goal is to create approximately 358 acres and
nourish 124 acres of saline marsh east of Leeville.
After consideration of three potential alternatives, features
and an alignment were selected to establish an arc of
wetlands along the north side of Southwestern Canal,
Lake Jesse, and the west side of South Lake. This is to
begin rebuilding the structural framework of wetlands
east of Leeville and provide protection for Leeville from
southeasterly winds and tides. A robust engineering and
design cost was included for full flexibility during Phase 1
to expand the project if cost allows or to assess alternative
configurations, if necessary. The proposed features consist of
hydraulically mining sediment from a borrow source in Little
Lake west of Leeville and pumping dredged material to
create and nourish marsh east of Leeville. The disposal areas
would be fully contained during construction and gapped
no later than three years post construction to facilitate
establishment of tidal connection and function. Additionally,
a portion of the created marsh acres would be planted with
smooth cordgrass following construction to help stabilize the
created platform by increasing the rate of colonization. 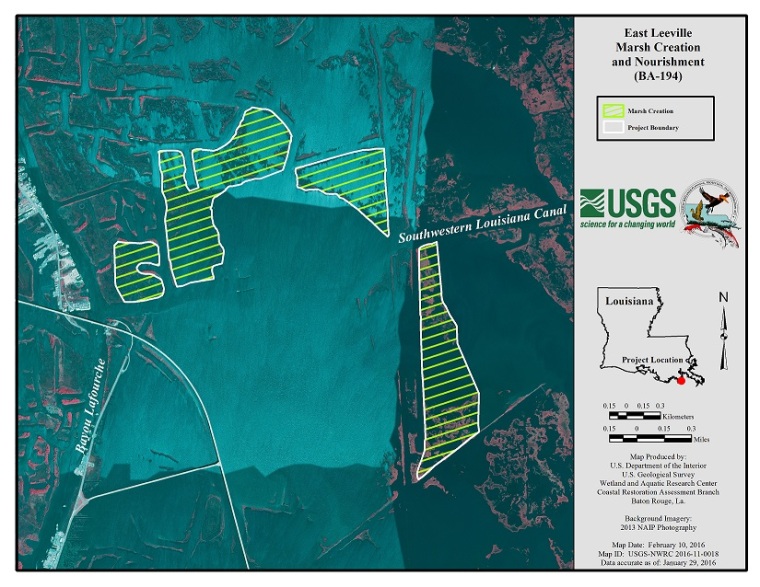 This project was approved for Phase I Engineering and
Design in January 2016.

The East Leeville Marsh Creation and Nourishment’s sponsors include: