Frequently included in the visionary imagery of Louisiana’s swamp landscape is gray, vine-like vegetation commonly seen draped on cypress branches. Thought to be a moss, Spanish moss is actually a bromeliad related to pineapples and succulent house plants in the same taxonomic family. Similarly, Spanish moss is not native to Spain, as is commonly thought; it is, however, native to South America and the Caribbean and grows from Texas to Virginia in the U.S. Inclined to moist areas, an ideal habitat for Spanish moss is a tree residing in a tropical swampland. Spanish moss is a rootless epiphyte—although Spanish moss is located on tree branches, it does not obtain food or water from the supporting tree as a parasite would. Spanish moss spreads and propagates from fragments known as festoons which are carried by wind or birds and initiate growth after landing in suitable conditions. An abundance of wetland wildlife utilize Spanish moss for survival needs, such as birds building nests and spiders and frogs hiding from predators.

A trademark of the freshwater swamp landscapes in temperate climate zones, this deciduous conifer has made its mark as a signature resident of Louisiana, having been

named the state tree. The widely adaptable bald cypress thrives best in wet, swampy soils of riverbanks and floodplains and is commonly thought of as a famous inhabitant of American swamplands, such as those that border the Mississippi River. Cypress trees will often have Spanish moss draped from branches and cypress knees protruding from the water or soil surface, as well as terrestrial and aquatic wildlife in close proximity who are dependent upon these trees. Swamp imagery usually includes bald cypress trees which are commonly correlated with Cajun culture. Cypress trees also contribute to a major portion of Louisiana’s forestry industry with an estimated annual harvest of 30 million board feet per year. The town of Patterson was once home to the largest cypress sawmill in the world and is now designated as the Cypress Capitol of Louisiana. Having both historical and economic importance, cypress trees that are at least two hundred years old and alive at the time of the Louisiana Purchase are being identified and landmarked as part of the Louisiana Purchase Cypress Legacy program to commemorate the state’s natural heritage. Cypress trees have been considered essential in the representation of swamp wetlands and hold exceptional importance to Louisiana. 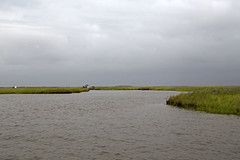