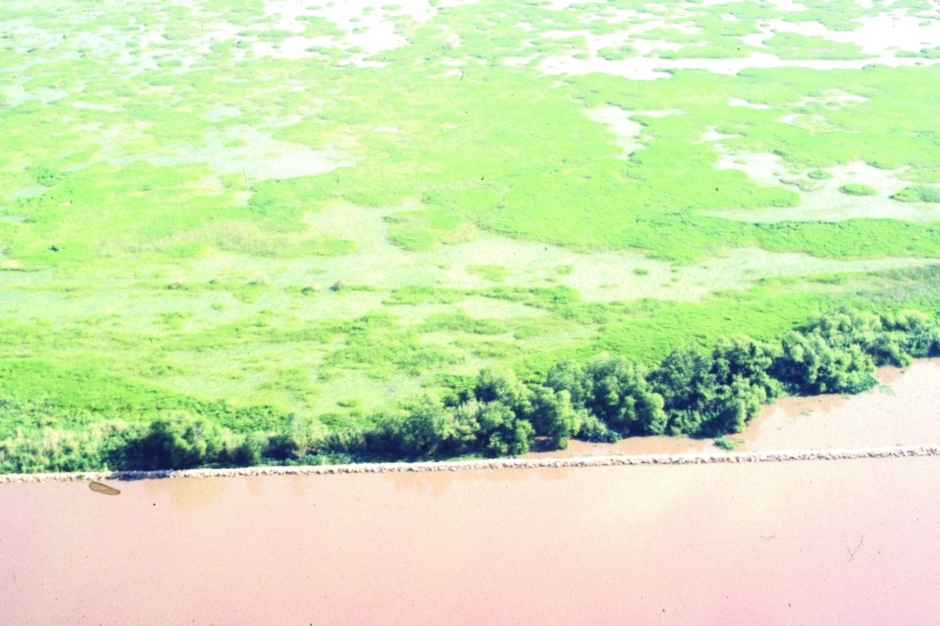 The management levee between the GIWW and the
Cameron Prairie National Wildlife Refuge was in danger
of breaching as a result of erosion from boat traffic in the
GIWW. If breaching had occurred, wave energy from the
GIWW and salt water would have entered the organic,
freshwater wetlands.

A 13,200-foot rock breakwater was constructed 50 feet
from the northern bank of the GIWW to prevent waves
caused by boat traffic from overtopping and eroding the
remaining spoil bank.
The project’s effectiveness is being evaluated by shoreline
movement surveys and by comparing pre-construction and
post-construction aerial photographs for changes in marsh
loss rates. 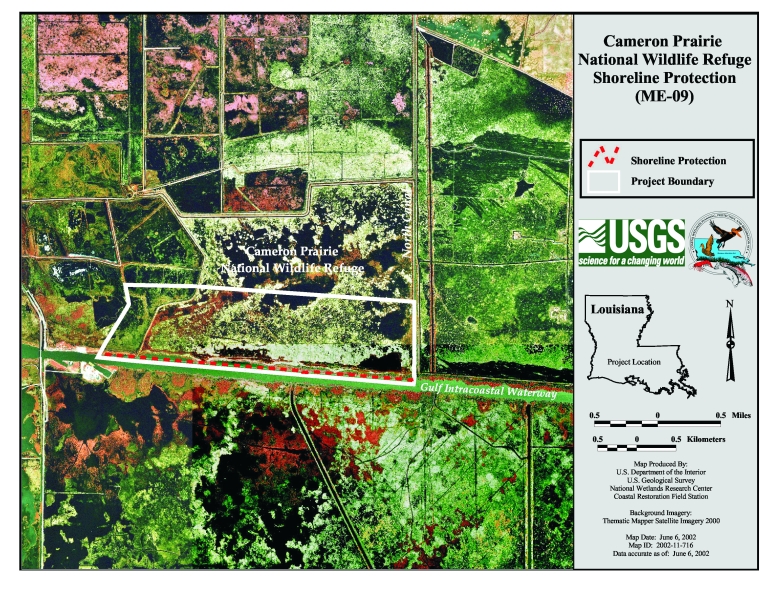 This project is located in Cameron Parish, Louisiana, on
the north shore of the Gulf Intracoastal Waterway
(GIWW), approximately 7 miles southeast of Sweet Lake
and to the east of Louisiana Highway 27 at its intersection
with the GIWW. It encompasses 640 acres of fresh marsh
and open water.

During 1993-97, while the project area had a 4.9% increase in
water coverage due to management for waterfowl, the
reference area remained unchanged.

The results of shoreline monitoring indicate that the project
has protected 13,200 feet of shoreline, along with 247 acres of
marsh north of the dike. This protection is expected to accrue
throughout the life of the project for a net restoration of at
least 23 acres. Monitoring has shown that the GIWW’s
northern shoreline advanced 9.8 feet per year in the project
area while retreating at a rate of 3.0 feet per year in the
reference area, indicating that low sediment availability does
not prohibit wetland creation behind rock dikes on navigation
channels.

To date, the project has exhibited success. It is expected that
the project area will continue to accrete new wetland area
between the spoil bank and the rock dike, further
safeguarding the adjacent wetland area from encroachment by
the GIWW.

The Federal Sponsor is USFWS

The Local Sponsor is CPRA