The Caminada Back Barrier Marsh Restoration Project is located in an especially dynamic area of the Louisiana Coast. The landward shoreline migration of the beach will significantly impact the project area over the 20 year life of the project. Historic shoreline migration rates average 41.4 feet/year over the last century. The increased losses occurred after Hurricanes Katrina and Rita in 2005 since the breaches remained open for an extended length of time. In addition, the losses were exacerbated by Tropical Storm Fay and Hurricanes Gustav and Ike in 2008. Significant prolonged breaches greatly increase the net export of sediment from the headland.

This project would create 246 acres of back barrier intertidal marsh and nourish 198 acres of emergent marsh using dredged material pumped from the Gulf of Mexico. The marsh creation and nourishment cells are designed to minimize impacts on existing marsh and mangroves. Assuming some natural vegetative recruitment, vegetative plantings are planned at a 50% density, with half planned at Target Year (TY1) and half planned at TY3. Containment dikes will be degraded or gapped by TY3 to allow access for estuarine organisms. The project would result in approximately 207 new acres over the 20-year project life. 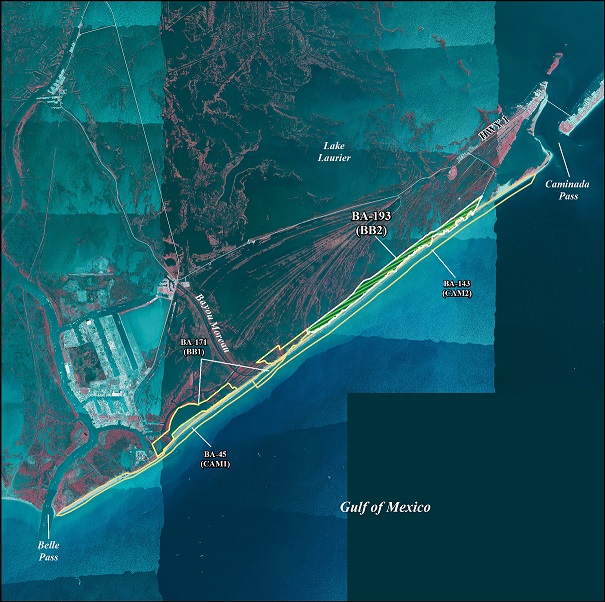 This project is on Priority Project List (PPL) 25 and was approved for Phase I Engineering and Design in January 2016.